People in glass houses shouldn’t throw stones, but they should throw parties — especially in this glass house that sits outside of Joshua Tree National Park. Known as the Invisible House, the elongated 22-story “horizontal skyscraper” is like a mirror-clad mirage in the desert. This once-in-a-lifetime stay is one of the most sought-after properties in Joshua Tree. It has been seen in design and lifestyle publications like Architectural Digest, Dezeen, TMZ, Business Insider, and Apartment Therapy — here’s why. 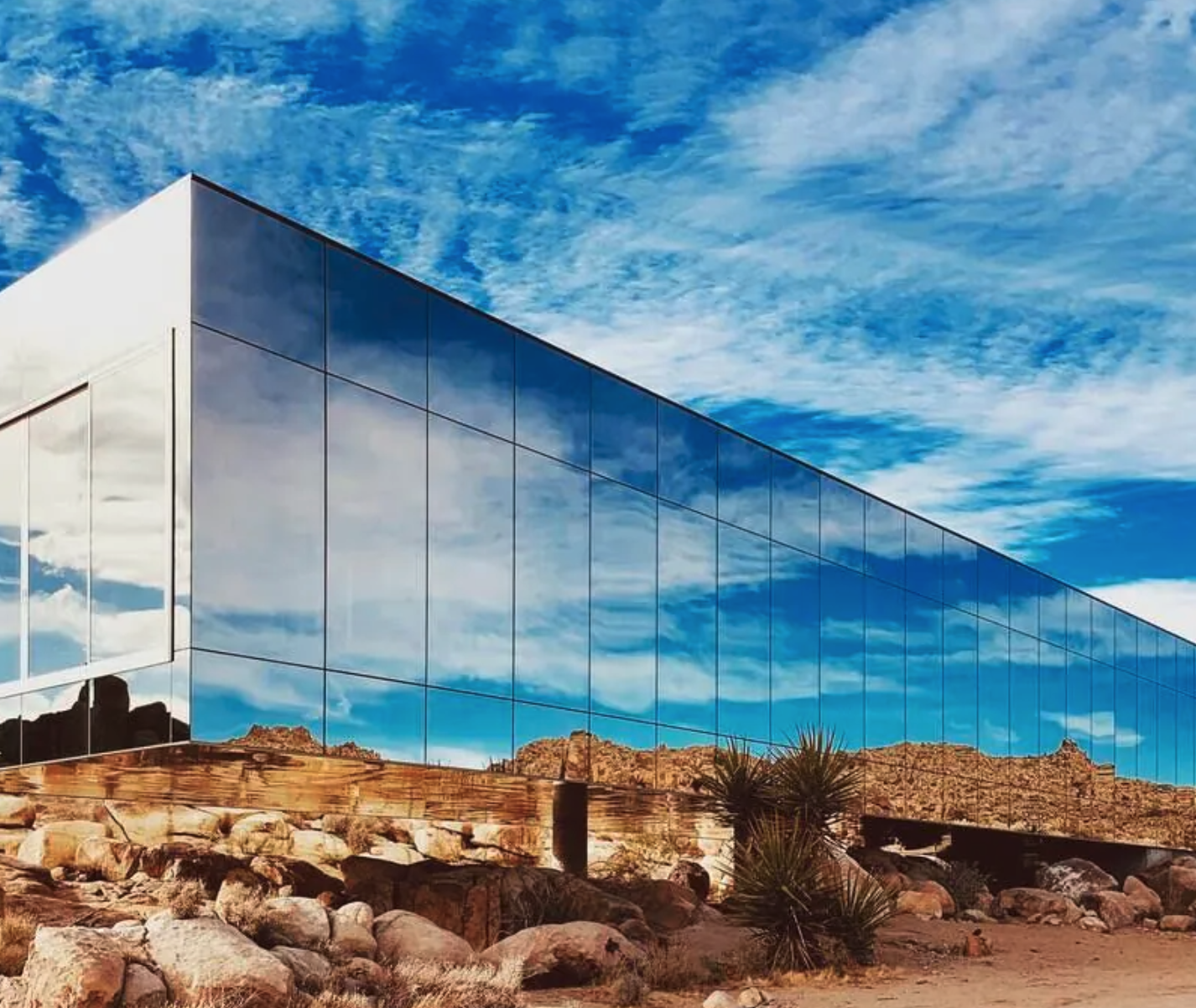 The 90-acre property is owned by film producer Chris Hanley, who is known for such films as The Virgin Suicides, and American Psycho. He designed the building along with Tomas Osinski, an artist, architect, and industrial designer. Osinski has collaborated with the likes of Frank Gehry (designer of the Guggenheim Museum) on several projects, including the gorgeous Delft porcelain fountain at the Disney Concert Hall in Los Angeles.

The all-electric house incorporates the most advanced materials and technologies available. With an environmental carbon footprint to near zero it’s also as green as can be. 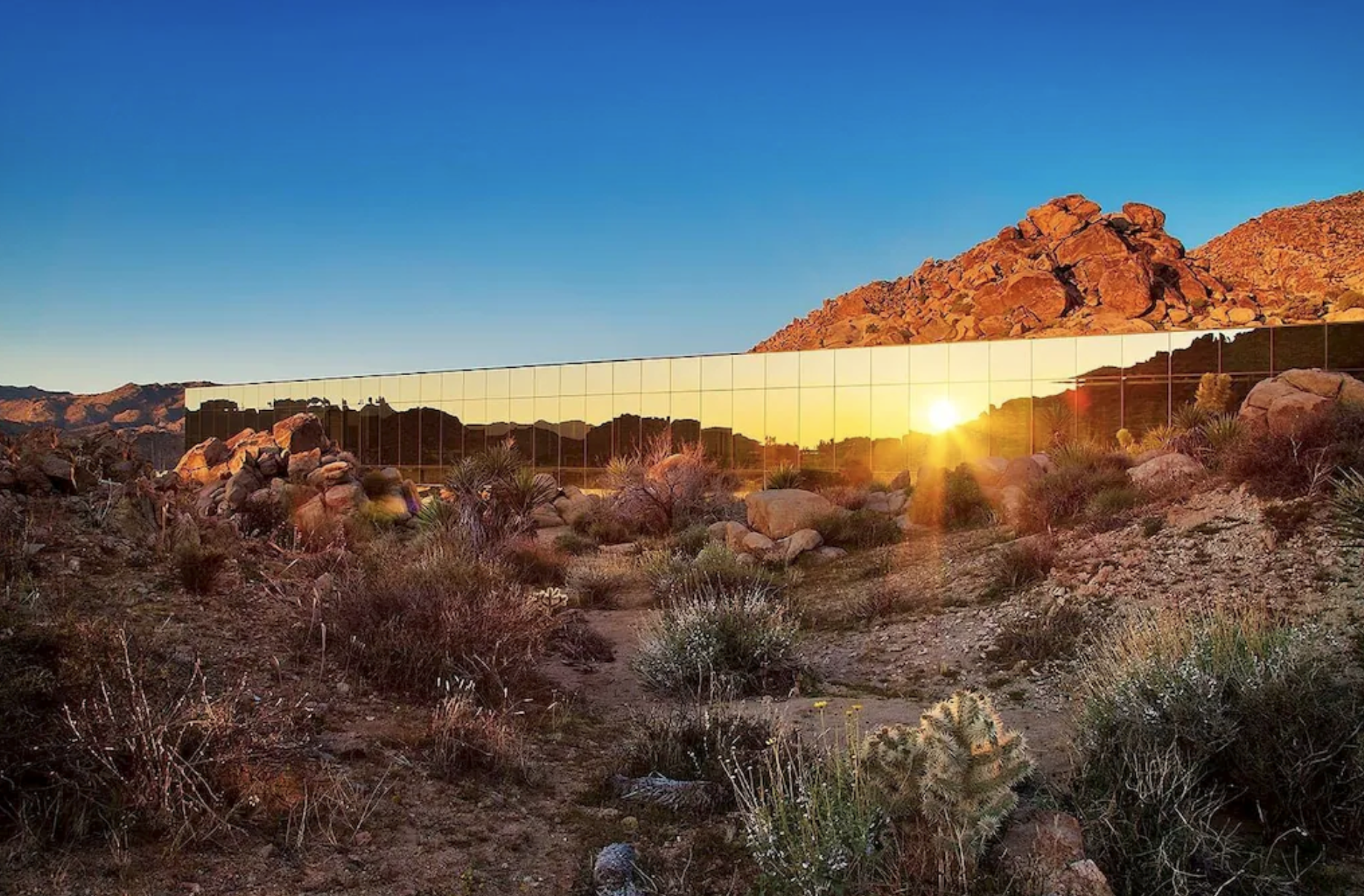 Mirror, Mirror, On The Wall

The sleek, 5,500 square-foot minimalist home features wall-to-wall views of boulders. Mirrored glass makes the building blend in with its surrounding desert landscape while offering stunning panoramic views from inside. Floor-to-ceiling doors slide open to let guests become one with the desert. 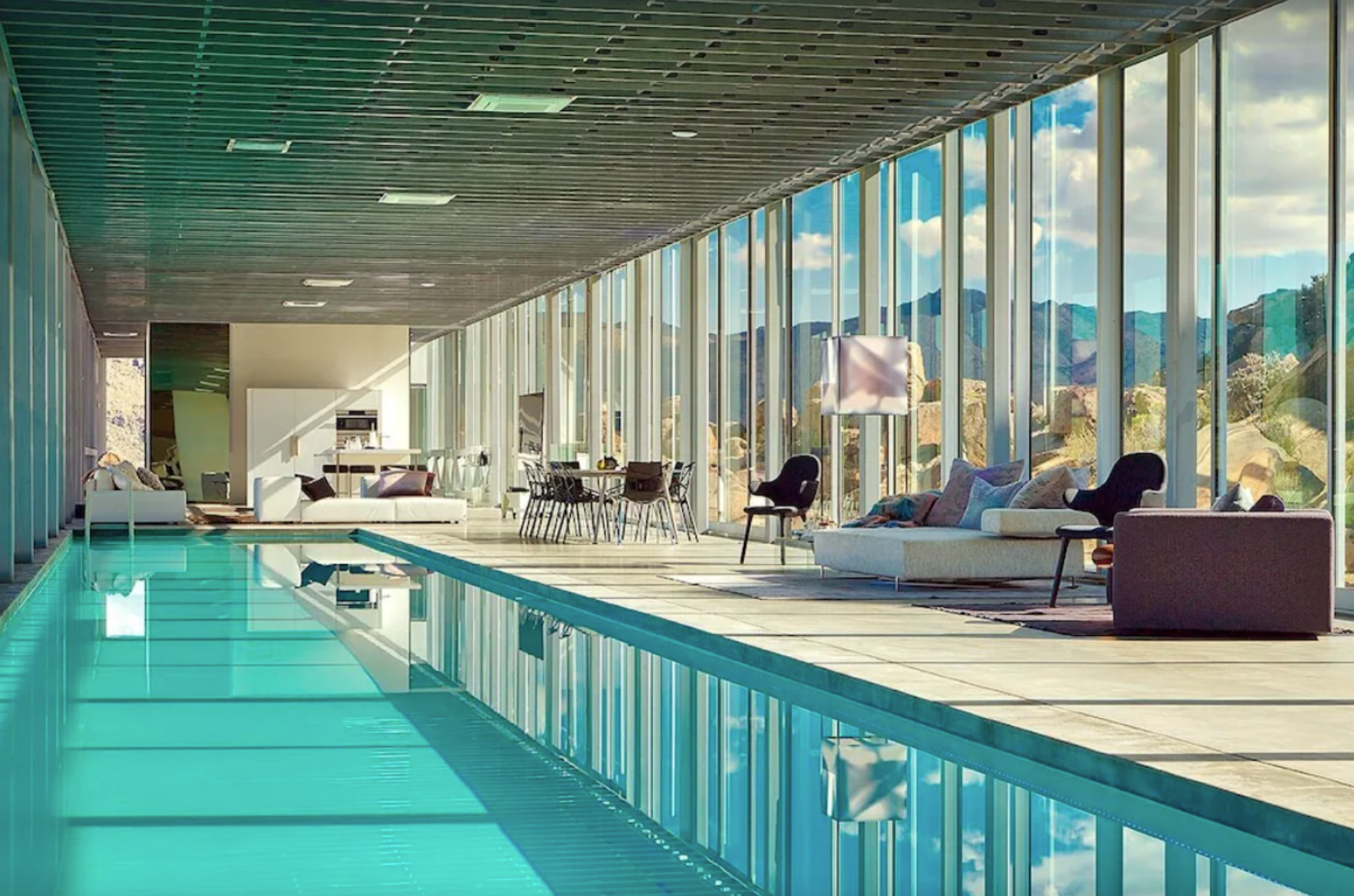 A luxurious 100-foot solar-heated indoor swimming pool takes up much of the interior.

Light Up The Night

Multi-colored controllable LED interior lighting lets you customize the color of the pool and the house! 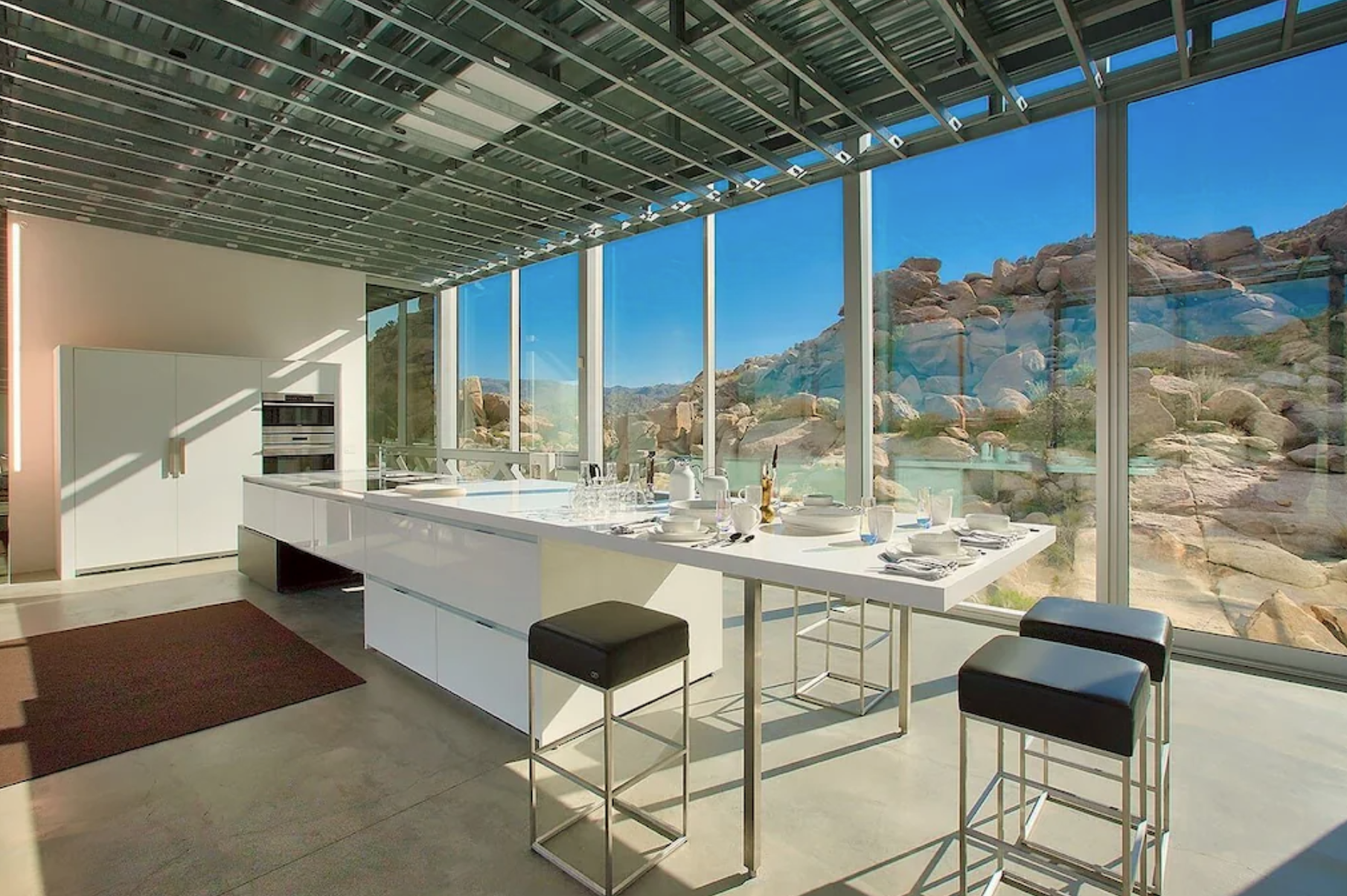 Boffi designs are carried throughout the four full bathrooms, which feature open steel and glass rain showers and Gessi Rectangolo and Duravit fixtures. The master suite has a free-standing Boffi SWIM tub to soak in. 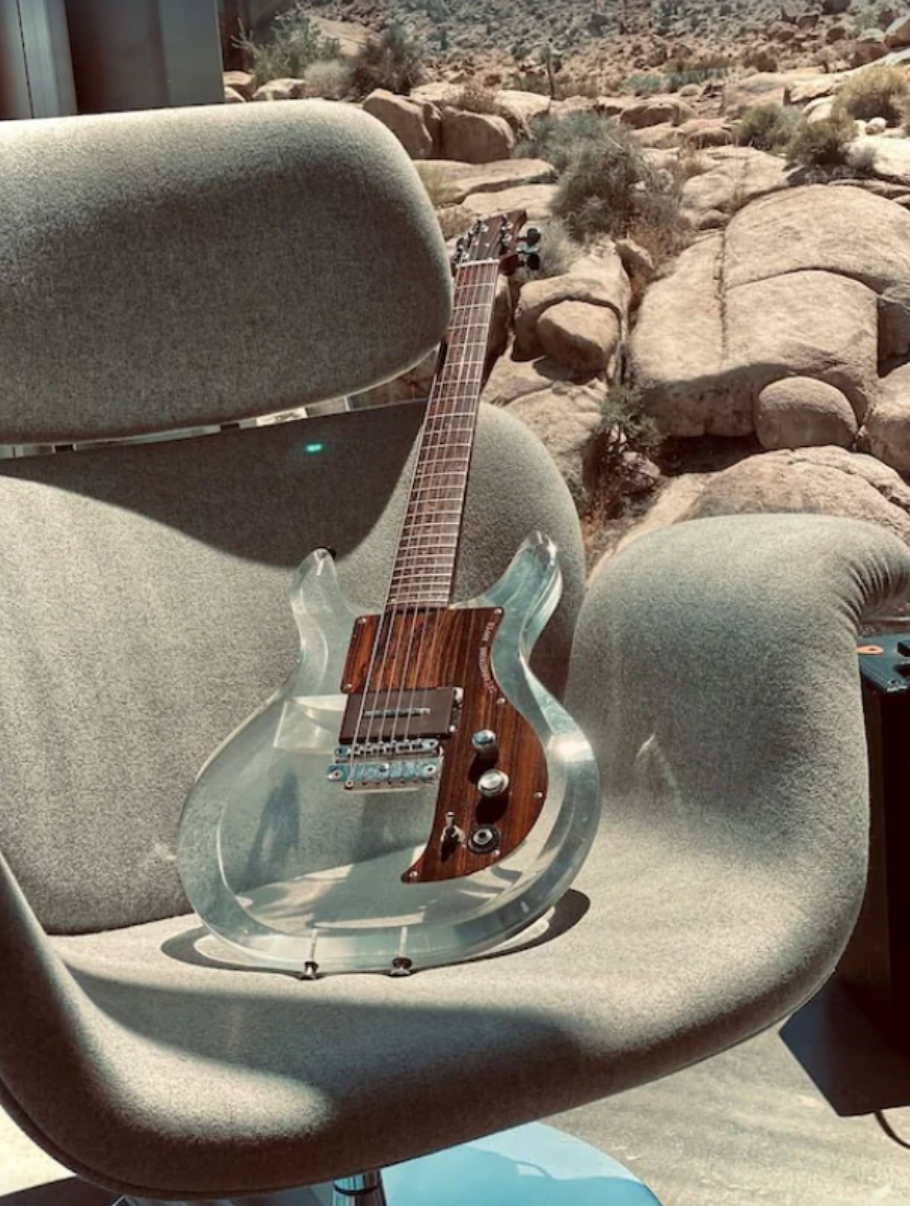 A favorite destination among artists, the Invisible House comes with its own Invisible Dan Armstrong electric guitar and amp. Play whatever music you want, wherever you want on the Bose Portable Home Speaker. There’s also a massive 86-inch TV in the living room with streaming services as well as a Blu-Ray DVD with dozens of recent films. 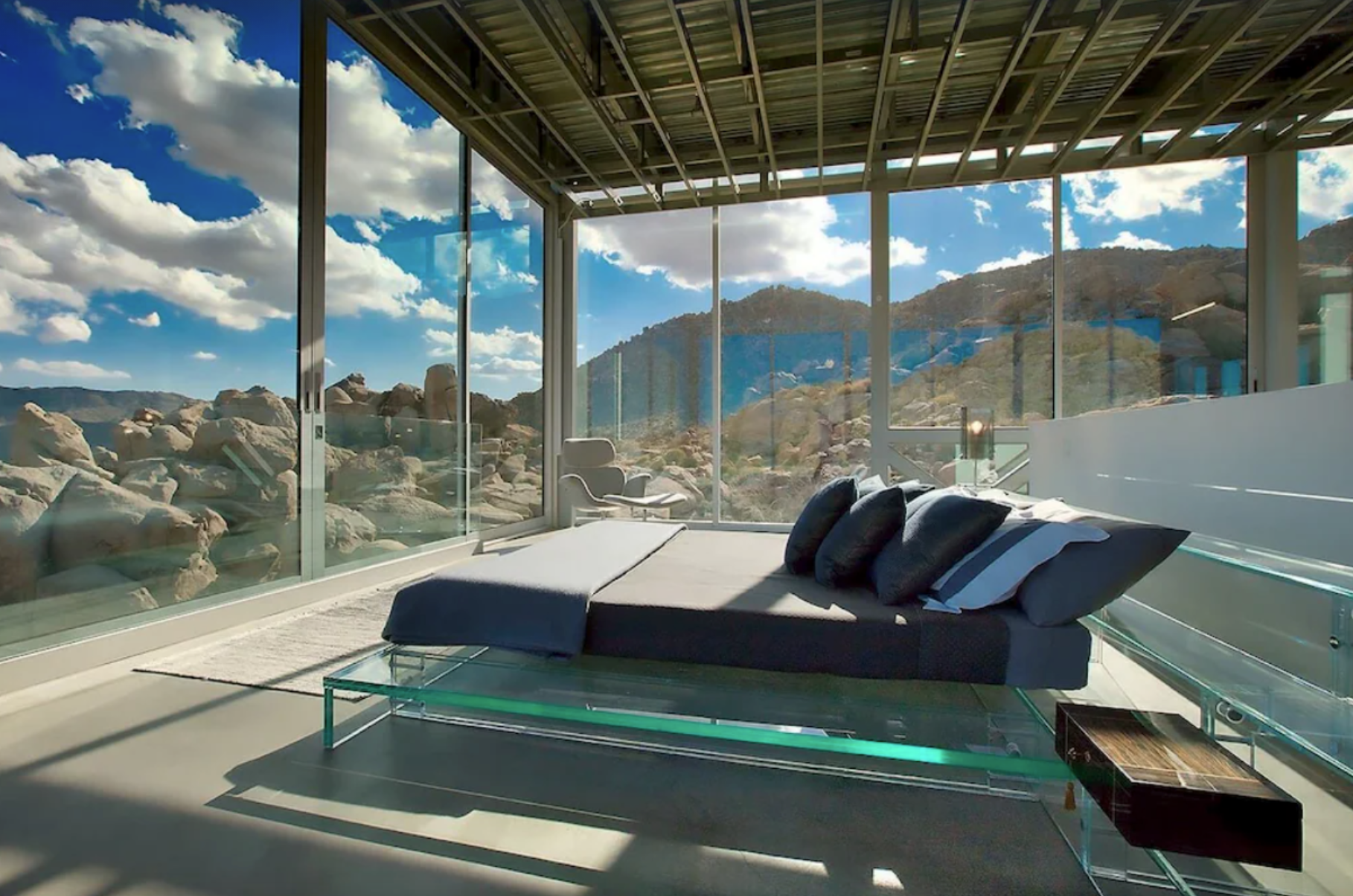 Three large luxurious suites with king beds sleep six. The guest beds are pure marble, while the master suite’s bed frame is made of solid glass. Weighing in at two tons, the glass bed was designed by Santambrogiomilano. Ligne Roset and Tempur-Pedic mattresses are draped with Frette linens and plenty of pillows. Each bedroom has remote-controlled blackout shades, but who would want to miss that desert sunrise?

A separate one-bedroom OMD prefab guesthouse is automatically added for groups of seven or eight guests. The 720 square-foot house is just steps from the main house, with some of its same luxurious touches. It features floor-to-ceiling windows, a king-sized Piero Lissoni Bed, and a modern, green design.

The property has its own 4000-foot peak and is filled with hiking trails to explore. Half a mile of it is bordered by Joshua Tree National Park. Guests have direct walk-on access to the national park’s Desert View Conservation Area. While secluded, the Invisible House is located just 10 minutes from the restaurants, coffee shops, yoga studios of downtown Joshua Tree. It also only takes a 5-minute drive to the West Entrance Station of Joshua Tree National Park.