Floating homes, luxury living and smart home technology aren’t necessarily things that tend to go hand in hand. But Ocean Builders, a Panama-based company that specializes in innovative marine technology, has just unveiled a fleet of “revolutionary living pods” that manage to bring all three together. Described as the “world’s first eco-restorative homes,” the pods, which range from around $295,000 to $1.5 million in price, are currently under construction in the Linton Bay Marina on the north coast of Panama. 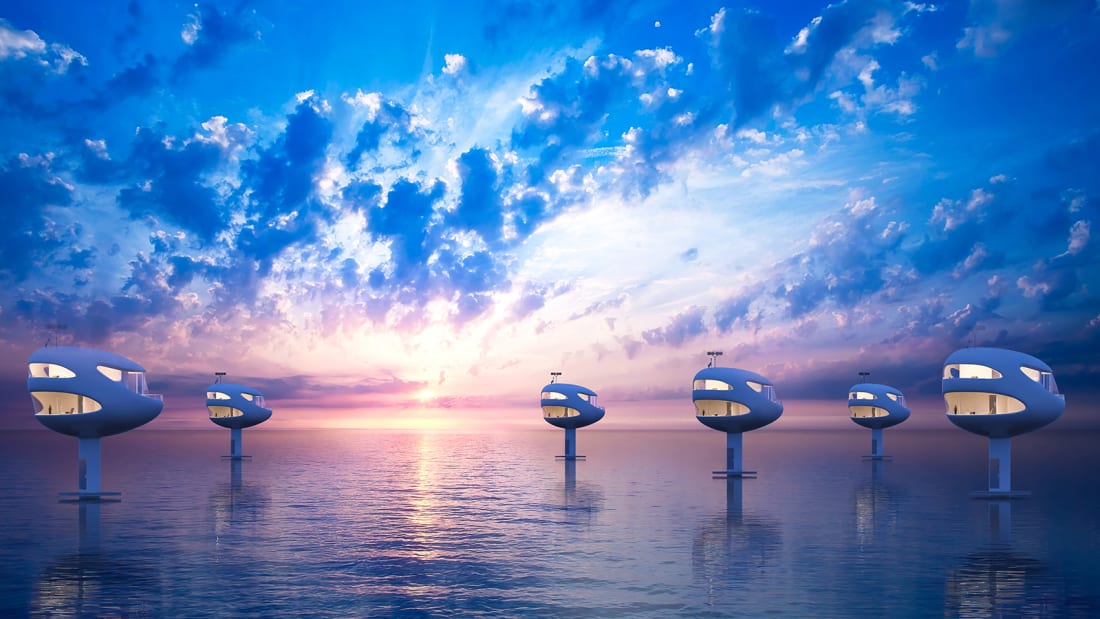 Designed by Dutch architect Koen Olthuis and his team at Waterstudio, the three models available include flagship model the SeaPod, built for aquatic living, the GreenPod, devised for land use, and the EcoPod, an ecologically and economically friendly option. The Seapod was conceptualized by Rüdiger Koch, Head of Engineering at Ocean Builders, along with Chief Executive Officer Grant Romundt, as a solution to the lack of space in popular beach destinations. The elevated structure provides 833 square feet (73 square meters) of living space, including a master bedroom, living room, kitchen and bathroom, spread across three and a half levels. With room for two people, the unit utilizes over 1,688 cubic feet of air-filled steel tubes to float 7.5 feet (2.2 meters) over the waves, and features 575 square feet of panoramic windows and 360-degree ocean views. 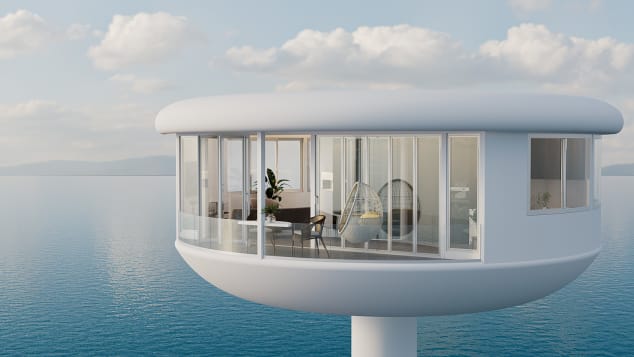 Romundt hopes the design will challenge perceptions of homes and travel, as well as allow residents to live on the water without having to make sacrifices when it comes to the “luxuries of modern living.” “Normally when you live on the water, it’s on a boat, which has a living situation that is unacceptable to most people,” Romundt tells CNN Travel. “So we’ve designed a home that floats on the water that gives you an experience of living on land, but even more.” The pods are to be equipped with state-of-the-art technology, along with customizable applications that tailor the design and functionality to suit those inside. Meanwhile, special “smart rings” worn by residents will enable them to unlock doors and switch their music on at the wave of a hand. “If [technology company] Apple had built a home, I think you would end up with the SeaPod, or the GreenPod, or the EcoPod,” says Romundt. “There’s a lot of technology built into the homes. “I like to think of it as, instead of having a phone as a digital assistant, your home actually becomes your assistant, and you can use it to optimize your life.” 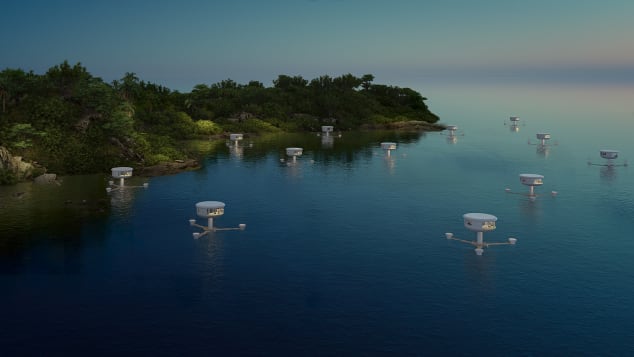 The pods will initially be located in an area close to the Linton Bay Marina. However, the Ocean Builders team hope to be able to distribute them internationally once they’re confident the technology can be supported elsewhere. A long-time advocate for oceanfront living, Romundt previously lived in a floating home in Toronto, and says it’s a lifestyle that’s hard to match. “There’s just something really magical about being able to get up in the morning, walk downstairs, jump on a paddleboard and go for a paddle,” he explains. “It’s very peaceful and beautiful. Most people spend all year dreaming of their two-week vacation where they go to a tropical island, hang out, relax, regenerate and restore themselves. “So why not just live like that all year round? It’s so easy to be able to work remotely now.” While those who opt to live in one of these particular units will likely need to have a sense of adventure, as well as a fondness for water, Romundt says the team don’t necessarily have a specific type of customer in mind. 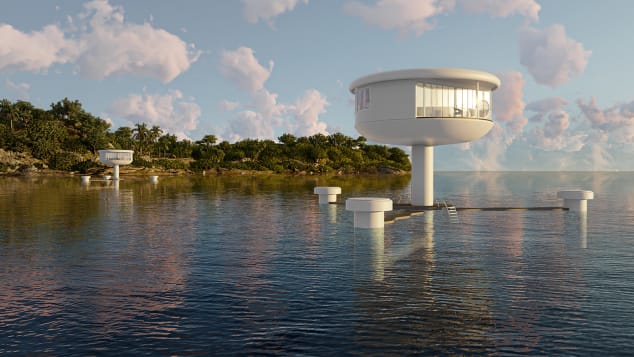 In fact, he’s confident that the majority of those who get to experience the Seapod for just a few minutes will jump at the chance of owning one. “When I lived in my floating house in Toronto, every single person that came over to visit fell in love with the place,” he says. “So all I need to do is to get people to step on board a Seapod for five minutes. The experience will just blow your mind. It’s really incredible.” But what about practicalities such as buying groceries, as well as traveling back and forth from the pod to the mainland? According to Romundt, customized aerial delivery drones are to be used to deliver items such as food and medicine, as well as “everyday smaller items.” For larger deliveries, there’s a separate autonomous vessel, which will also function as an ocean recycling vessel, collecting garbage and debris in order to keep the surrounding area clean. 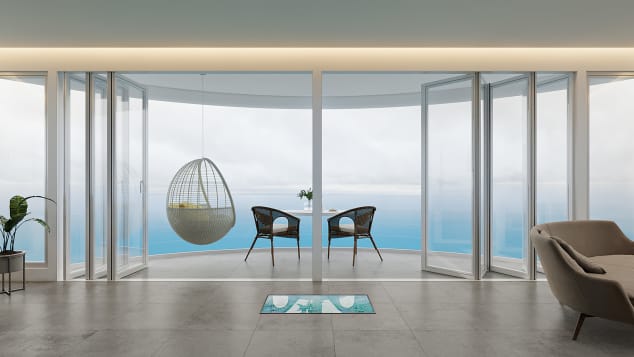 Residents and visitors can be transported to and from the SeaPod via dinghy boats, jet skis, local water taxis, and/or their own boats or vessels. And although they certainly seem to be geared towards those with a more minimalist approach, there’s a storage area measuring 1,250 square feet inside. With a focus on sustainability, the pods have been devised “to benefit the surrounding environment” and provide “a natural habitat for ocean life to occupy and thrive.” “We’re trying to build and design a home that is good for the environment, and doesn’t harm the environment,” explains Romundt. “And we’re always trying to innovate and to find ways to do that in an even better way. We’re not perfect right now, but we’re trying to get better and better all the time.” 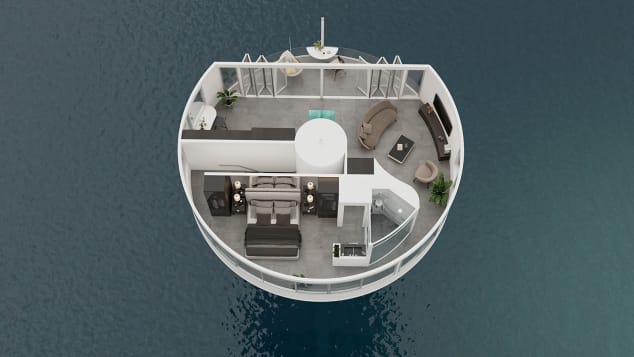 The first completed pods are to be revealed online in late September, and potential buyers will be able to go and view them for themselves soon after. “People have been trying to buy them for years,” Romundt says, explaining that the Ocean Builders team decided not to take deposits until buyers could actually see the pods in real life. “This is something so new. And there are so many real estate things that people put money into which never actually happen. “We didn’t want to take deposits until people could actually come down and set foot on a pod. So I’m excited that we’re finally at that point.” “This is a massive undertaking. I wanted to have it done two years ago. But to have it done in only three and a half years is pretty amazing.” The Seapods are among a number of new floating home concepts set to launch within the next few years, including the Floating Seahorse, a development by Kleindienst Group consisting of 131 floating villas that is to be part of $5 billion mega-resort The Heart of Europe project on The World artificial archipelago off the coast of Dubai. Those who snap up one of the first 100 Ocean Builders pods will be able to move in by the end of 2023, providing everything goes to plan. Production is scheduled to begin on a further 1,000 pods by 2024.