Home » These Are The Best Beach Towns in California

These Are The Best Beach Towns in California

When California gets mentioned, warm and fuzzy feelings wash over anyone who’s spent time there, due in large part to the times spent on the beach, soaking in the beautiful sunshine while enjoying the surf. Sure, California has the awe-inspiring Yosemite Valley and Joshua Tree’s weird and wonderful rockscape. But, let’s be honest here, visitors don’t fly in from around the world just to check out these inland features; they come to California for its beaches. Stretching 840 miles, California’s coastline is as impressive as it is vast, with literally hundreds of iconic beach towns to visit. The list is so long that seeing them all would be a tall order even if you’re on an epic California road trip. You’re going to have to narrow it down if you’ve only got time to visit the best. Here is a list of the best beach towns in California. Whether you’re looking to play “spot the celebrity” at Laguna Beach and Malibu, or slip into the low-key, surf-town vibes of a place – this is your itinerary for where to surf, eat, sleep, shop, and adventure along California’s Pacific coast. 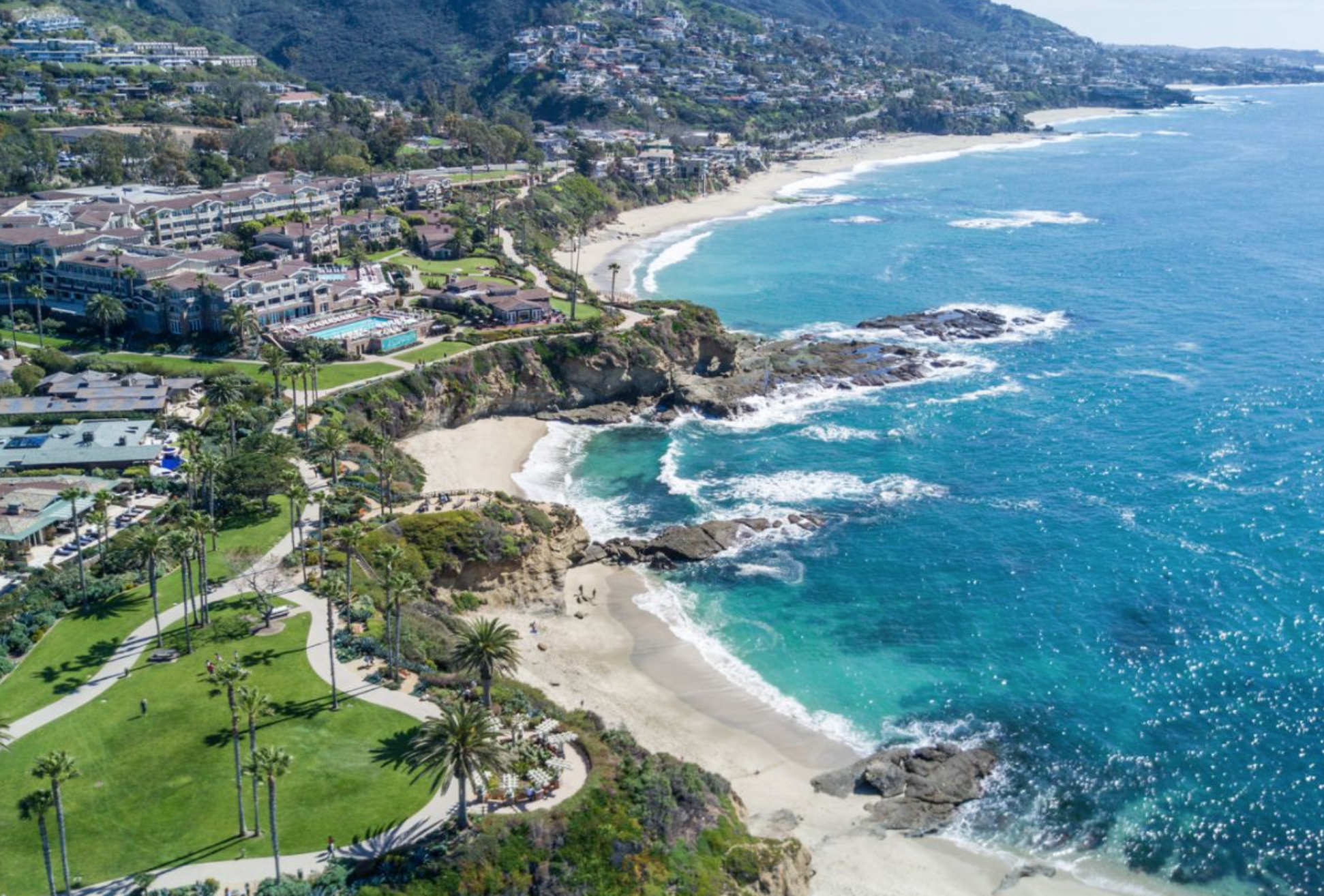 The craggy coves and cliffs that line Laguna Beach have been an artist’s enclave of inspiration for over 200 years. Home to eight miles of coastline that is supremely unique to California, there is no mistaking Laguna Beach from the next town. Not only has its turquoise waters and white-sand beaches inspired countless artists over the years, but its ocean-view hilltops are where some of Hollywood’s biggest stars take up residence. The 22,000-acre natural expanse of Laguna Canyon Wilderness Park has been furiously protected by locals, from developers, since the 80s. One of the last remaining untouched coastal canyons of Southern California. The park boasts 100 miles of hiking and biking trails and is the perfect place to stretch and test the legs. With a bounty of wilderness to the east and an ocean playground to the west, working up an appetite in Laguna Beach is an easy thing to do. Luckily, the town is known for its delicious eats and long-time local haunt Nick’s Laguna Beach has your appetite covered. Looking for somewhere to stay? Laguna Beach has it all. From super-luxe hotels like Hotel Joaquin to family-friendly RV parks and every lodging between. There’s a reason why Laguna Beach is so revered, and that reason is waiting for you down at Treasure Island Beach. In the meantime, hold tight to your hat, and dream of Laguna Beach’s salty sea breeze. 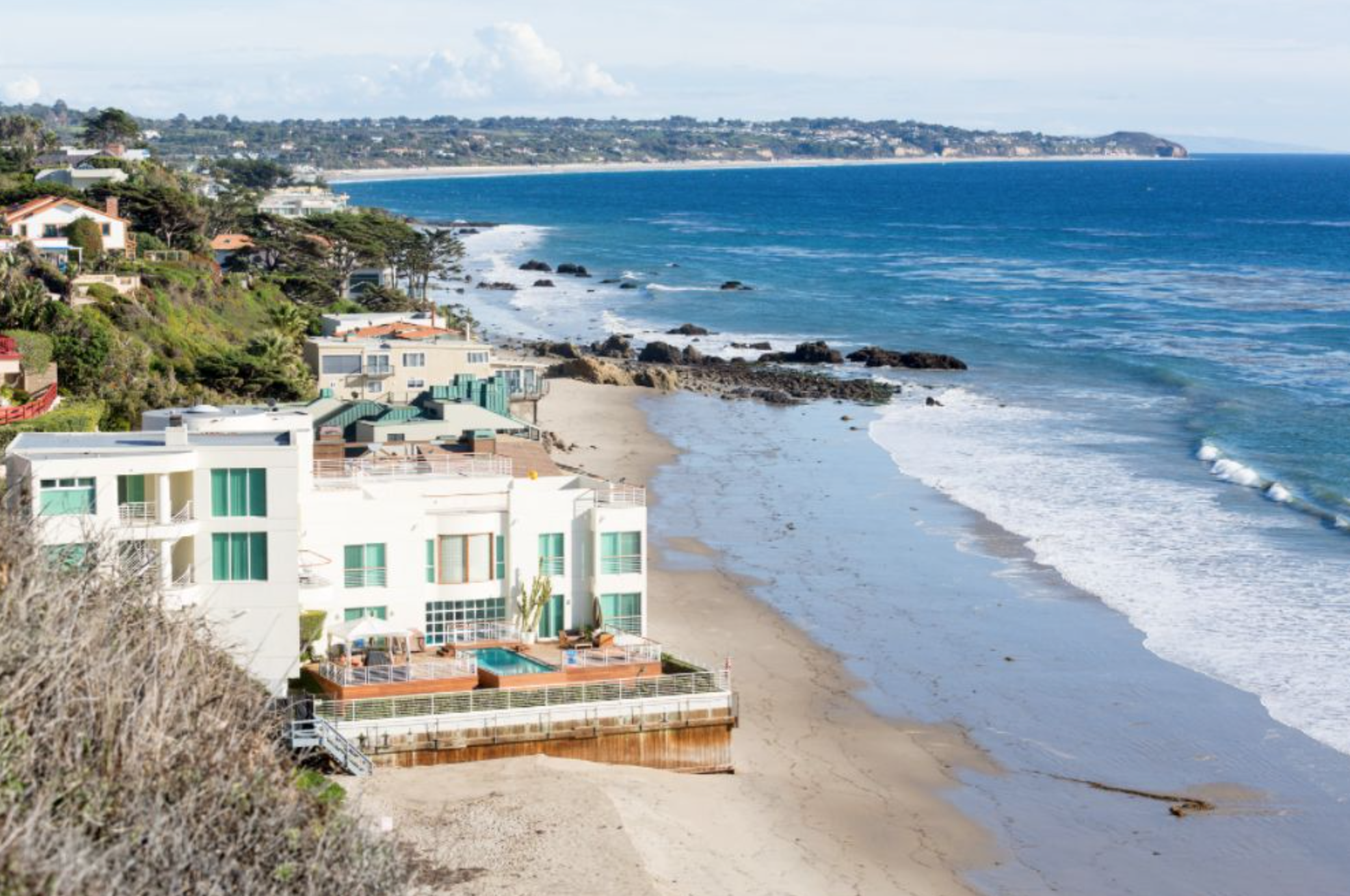 Another A-list celebrity hotspot, Malibu is where the world’s movers, shakers, and makers reside. Known officially as “Surfrider Beach”, Malibu’s fabled right point break has stoked California’s surfing fire since way back in the 50s. One of the most iconic surf spots in existence, it was, unsurprisingly, dedicated as the first “World Surfing Reserve” in 2010. Out of the water, immerse yourself in the exquisite art/ artifacts of ancient Greece and Rome at the Getty Villa Museum. Prefer to check out Malibu’s colorful history instead? Then head for The Malibu Lagoon Museum. If hiking is your digs, you’ll be pleased to know that Malibu is super close by to the amazing canyons, waterfalls, and grasslands of the Santa Monica Mountains National Recreation Area. If fishing is the game, and catching dinner is your aim, cast your eyes and lines toward Malibu Pier. With rough-hewn planks, sweeping coastal views, and a unique vantage point over Surfrider Beach, this charming fishing pier is certainly worth a visit. Across the road from the mecca of Malibu, and aptly named “The Surfrider”, a stay at this Californian beach house turned boutique hotel is as quintessentially Californian, as California gets. With plenty more postcard-worthy beaches to its name. Spots like Leo Carrillo and Zuma Beach, Malibu is where the filthy rich and filthy surfers mix in a melting pot of affluence and wave-riding passion, and it truly is a town to behold. 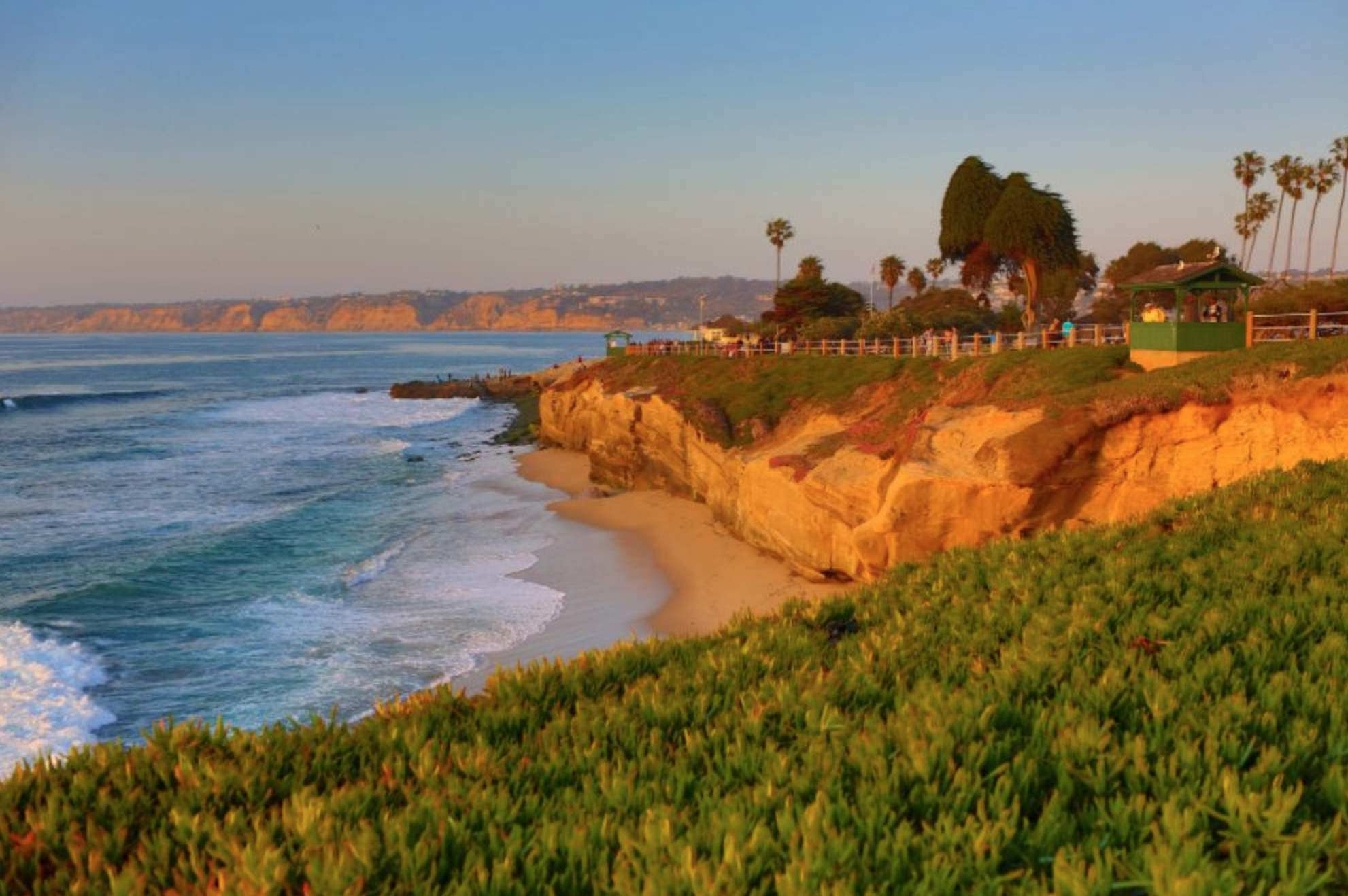 Loosely translating to “the jewel” in Spanish, La Jolla is a luxury seaside village a stone’s throw north of San Diego. Even with its close proximity to San Diego, this chic little village very much feels like its own thing. Famous for its culinary delights, La Jolla is home to a string of Michelin-star restaurants. For which the oceanfront Marine Room makes a good case for top honors. Also along its shoreline, you will find a series of dramatic cliffs and quaint little bays. The jewel of the jewel “La Jolla Cove” is a heavenly nook of beach that’s popular with swimmers. Don’t be alarmed if you spot a few furry friends basking in the afternoon sunlight, as seals and sea lions often frequent La Jolla Cove’s rocky outcrops. It’s almost as if we humans couldn’t let the seals have all the underwater adventures, because La Jolla is also a very popular diving spot. If you like the idea of getting down with the critters of the deep, then La Jolla Dive is the place to head for lessons, tours, rental gear, and the rest. In the heart of downtown La Jolla, Girard Avenue and Prospect Street are lined with high-end fashion brands like Cartier, contemporary coffee houses, and traditional “mall-style” shopping outlets. In a little surprise, Prospect Street is also where the rather regal hotel of Grande Colonial has been operating, in style, since 1913. 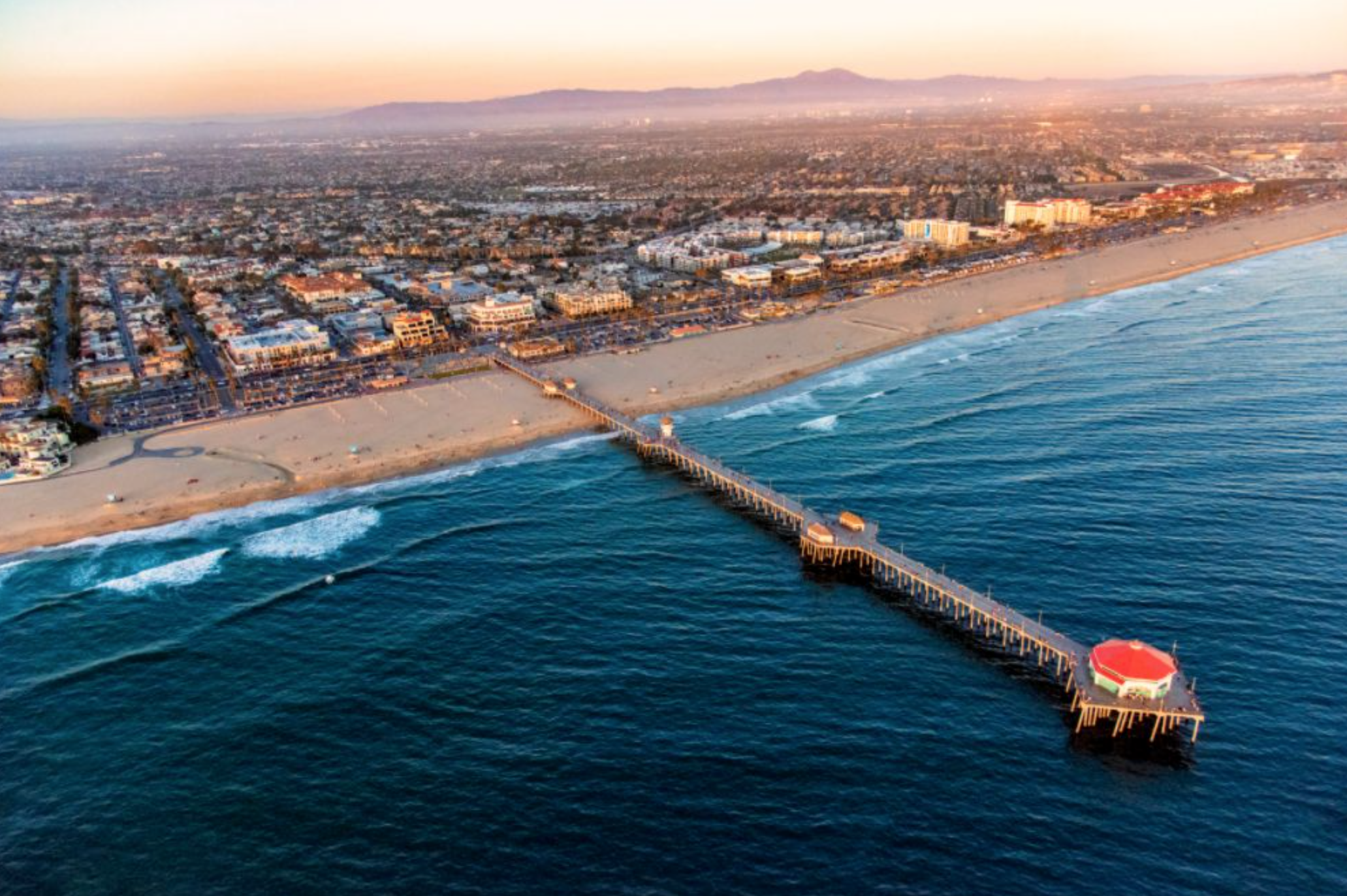 No list of California’s best beach towns would be complete without the O.G of California surfing – Surf City itself, Huntington Beach California. Hawaiian waterman and surfing pioneer George Freeth first surfed Huntington way back in 1907, which makes this hallowed stretch of sand ground zero for American surfing. Home to the International Surfing Museum, Surfers’ Hall of Fame, and Surfing Walk of Fame, if you have an interest in surf history, you head to Huntington. Not only that, but the town has played host to the U.S Open Of Surfing since 1959. Taking place in the summertime, this mammoth competition lights up the town with a festival-like atmosphere for two non-stop weeks of fun. You didn’t think New York City was the only place with a Central Park now did you? Orange County’s largest city-owned park, Huntington Central Park is a lush 350-acre haven that is prime real estate for weekend picnics, exercise regimes, and dog walkers alike. Fun fact: the park also boasts the largest children’s library west of Mississippi –  getting book smart and playing in the grass, what more could the kiddies want? From the uber-upmarket Paséa Hotel & Spa to the budget-friendly Travelodge, Huntington’s beachfront is lined to the nines with places to stay. In the thick of it and right opposite Huntington Pier, you might as well join in on the chaos, mayhem, and fun that is Huntington Beach, California, and live your best “Californian Dreamin” life. 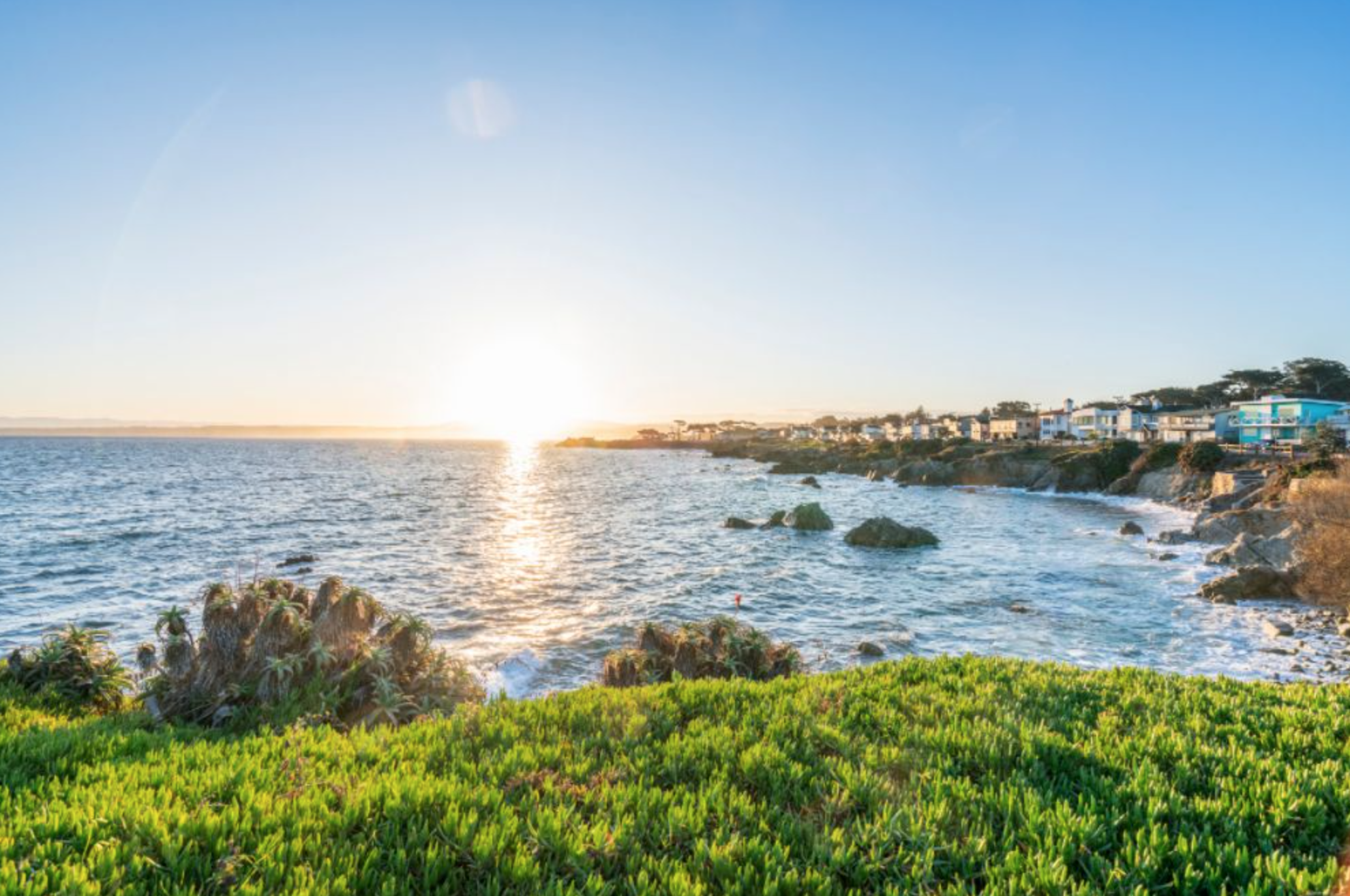 Carmel-by-the-Sea is definitely a cute beach town. It is almost completely unspoilt by chain stores and big resorts. Instead, the town has managed to keep itself very local and boutique. If you’re looking for a Marriott-type destination, this isn’t it. The local beach vibe here is intermingled with a European sophistication that you can only find in Carmel-by-the-Sea. Thing local, high-end boutiques and charming beach-side BnBs. One of my favorite things about Carmel is the plethora of wine tasting rooms, like Wrath Wines and Scheid Vineyards tasting room. There’s a whole wine walk you can do within just a few blocks. There are many restaurants to go along with your wine, like Flaherty’s Seafood Grill & Oyster Bar French fare at La Bicyclette.

What they say is true – variety is the spice of life. And after visiting each of these beach towns, you’ll be so spiced up off life, you won’t know what to do with yourself. Whether you prefer the quieter vibes or you are already picturing yourself exactly where the action is at Huntington and Venice, at least you now know what you’re in for. The world may be a little unhinged in places, the mercury may be rising, house prices may be skyrocketing. But, at least we have the magic of California and its warm Pacific breeze waiting for us to experience, at least once in our lives.