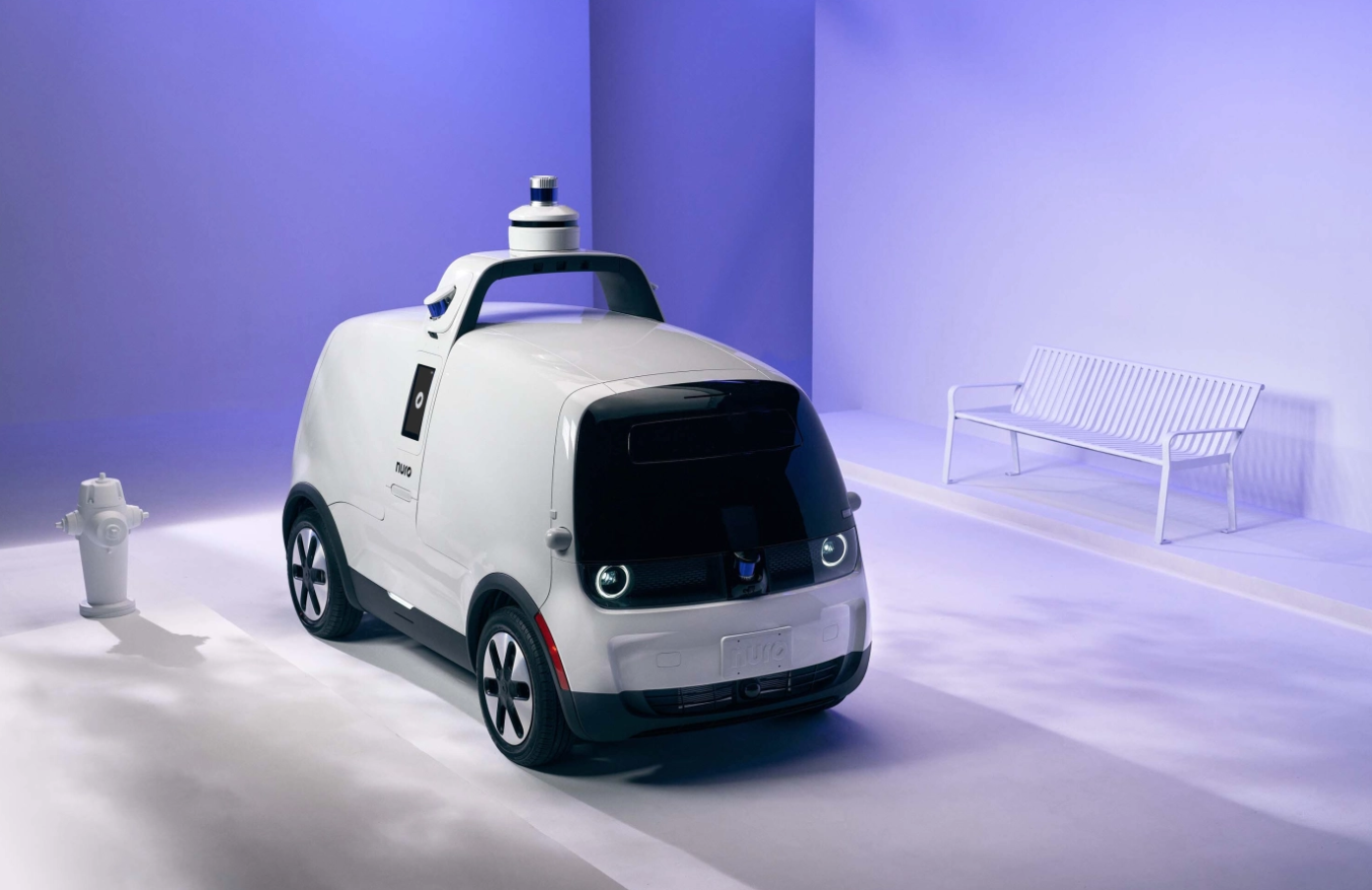 Nuro showed off Wednesday one of the final pieces of its commercial autonomous delivery strategy. The startup, which has raised more than $2.13 billion since former Google engineers Dave Ferguson and Jiajun Zhu founded the company in June 2016, unveiled a third-generation electric autonomous delivery vehicle designed for commercial operations and manufactured in partnership with BYD North America. Nuro has dropped the alpha-numeric nomenclature (R1 and then R2) for this delivery bot that is designed to haul packages, not people. Instead, the vehicle is called “Nuro” — a self-titled album of sorts meant to introduce the robot to the masses and a name that illustrates where this flagship model sits within the company. If it’s not clear, the “Nuro” is at the top. The Nuro bot is not a sidewalk delivery bot. This new generation, and all of Nuro’s previous iterations, are meant for the road. 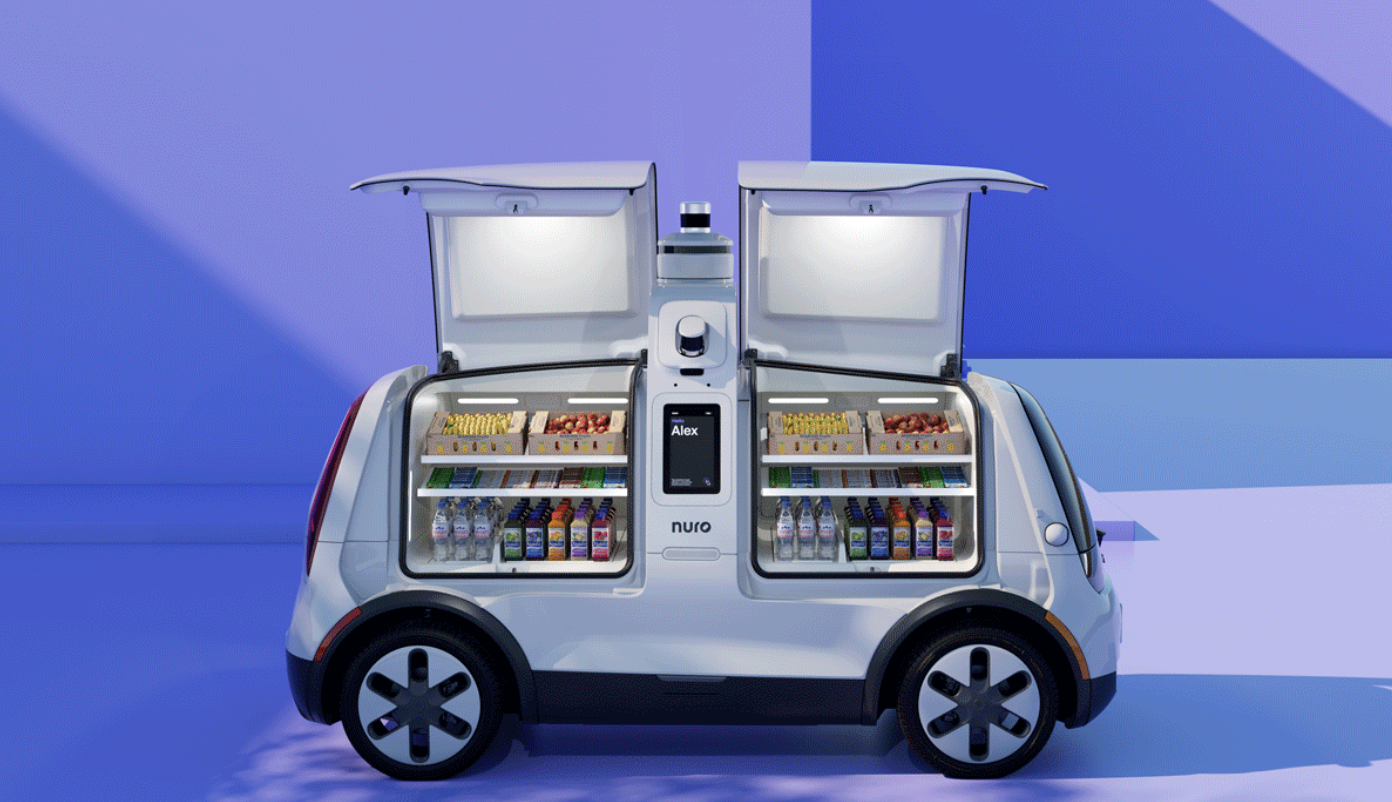 The new “Nuro” bot, which has twice the cargo volume of the previous model, customizable storage and temperature-controlled compartments to keep items warm or cool, is an automotive production-grade vehicle. This means the bot is designed and produced to handle the toils one might expect a delivery vehicle to endure, including weather, potholes, human abuse and long hours on the road. The Nuro delivery bot also contains safety features, which are designed to protect people like pedestrians and cyclists who might encounter the vehicle. The vehicle is equipped with several types of sensors, including cameras, radar, lidar and thermal cameras to provide a 360-degree view that has built-in redundancy in case one fails. One notable item is an exterior airbag that will deploy if the vehicle were to come into contact with a person or other object. 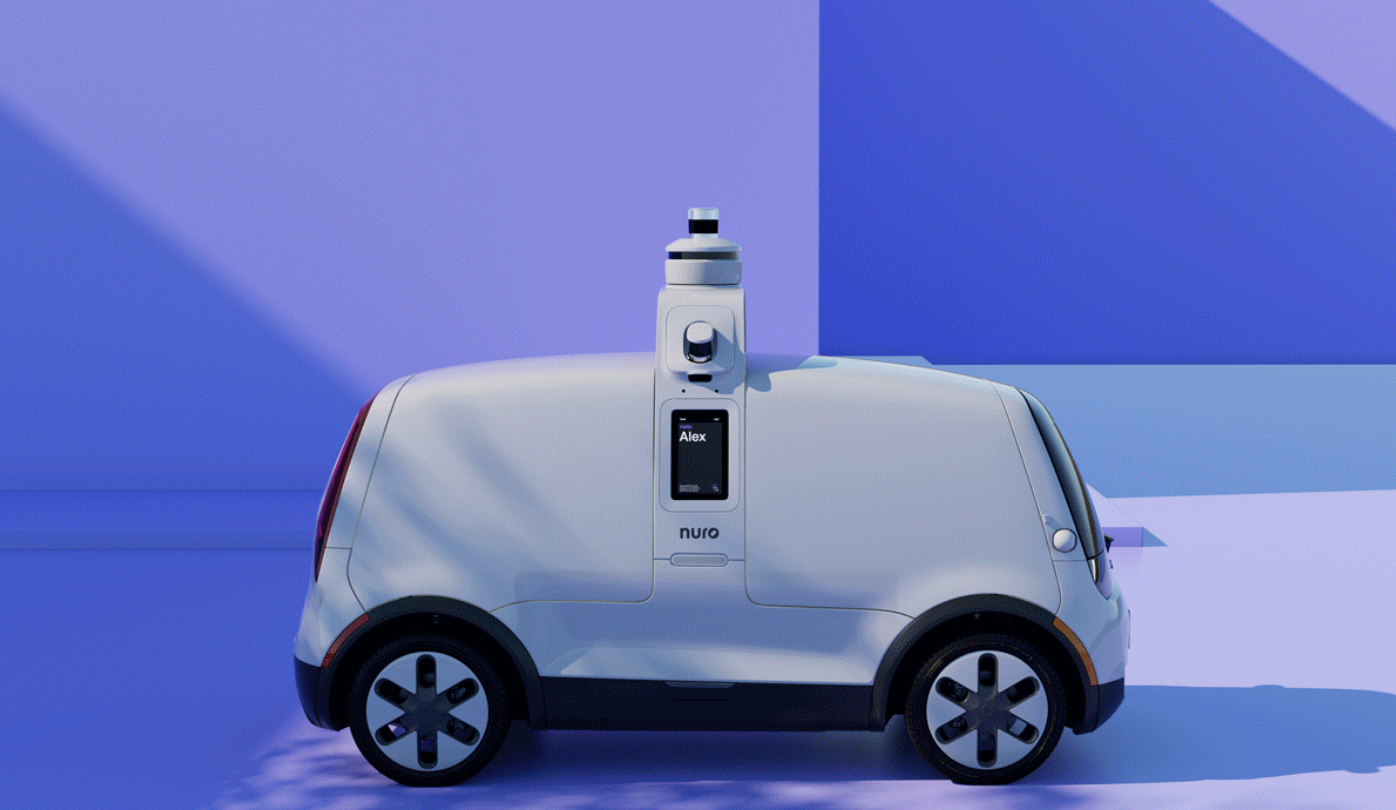 Initially, the company used modified Toyota Prius sedans for testing as well as for pilot grocery deliveries in Arizona and Texas. The company transitioned in December 2018 to the R1, its first step toward a vehicle designed exclusively for packages. Its second-generation vehicle, called the R2, was introduced in February 2020. The R2, which was designed and assembled in the U.S. in partnership with Michigan-based Roush Enterprises, was equipped with lidar, radar and cameras to give the “driver” a 360-degree view of its surroundings. However, it was missing a few features typically required by the U.S. Department of Transportation’s National Highway Traffic Safety Administration. After three years of working with regulators, Nuro received a driverless exemption from NHTSA for its R2 vehicle. The exemption allows the vehicle to operate even though it doesn’t have side-view mirrors, a windshield and a rear-view camera that shuts off when driving forward. Nuro has also received all of the necessary approvals and permits to operate an autonomous vehicle delivery service — that can charge customers — in California. The new “Nuro” bot is the final step, at least for now, toward its commercial goals. 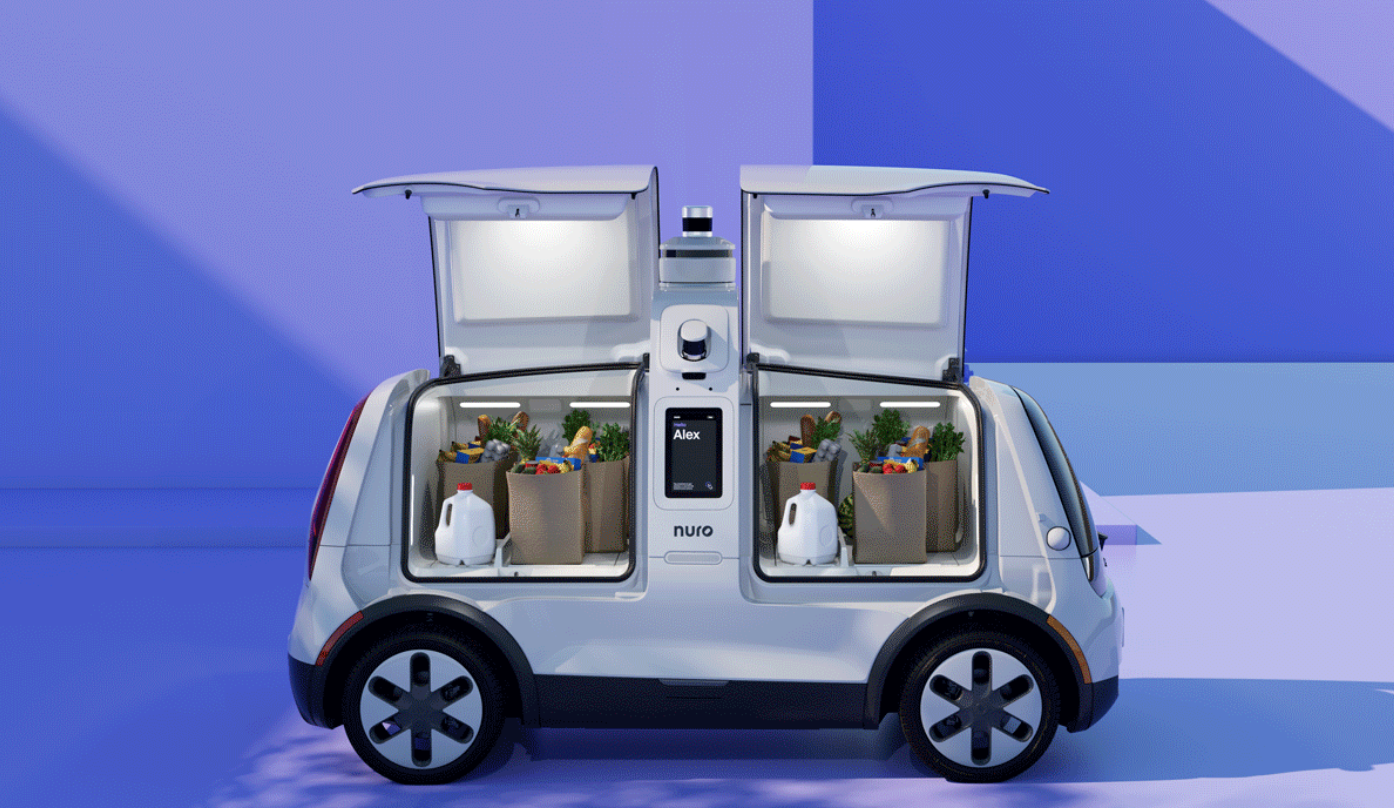 Building Bots in the Desert

The company isn’t quite ready to unleash its Nuro en masse just yet. Although it’s getting close. Nuro has raised an abundant amount of capital, piloted its vehicle with high-profile partners and grown to more than 1,200 employees. In less than five years, the company has attracted high-profile private and institutional investors, including Greylock Partners, SoftBank Vision Fund and T. Rowe Price Associates Inc. Its latest $600 million fundraising round announced just a few months ago was led by new investor Tiger Global Management and included Baillie Gifford, Fidelity Management & Research Company LLC, Gaorong Capital, Google, Kroger, SoftBank Vision Fund 1, funds and accounts advised by T. Rowe Price Associates, Inc. and Woven Capital. Nuro has also landed several high-profile partners, including 7-Eleven, CVS pharmacies, Domino’s, FedEx, Kroger grocery stores and Walmart. Now, it’s using some of that capital to build a new $40 million end-of-line manufacturing facility and closed-course test track in southern Nevada. The company is also taking over 74 acres of the Las Vegas Motor Speedway to build a closed-course testing facility that will allow the development and validation of its autonomous on-road vehicles. The testing track will measure bot performance in a broad range of scenarios, from avoiding pedestrians and pets to giving bicycles space on shared roadways, as well as environmental tests and vehicle systems validation, the company has previously said. 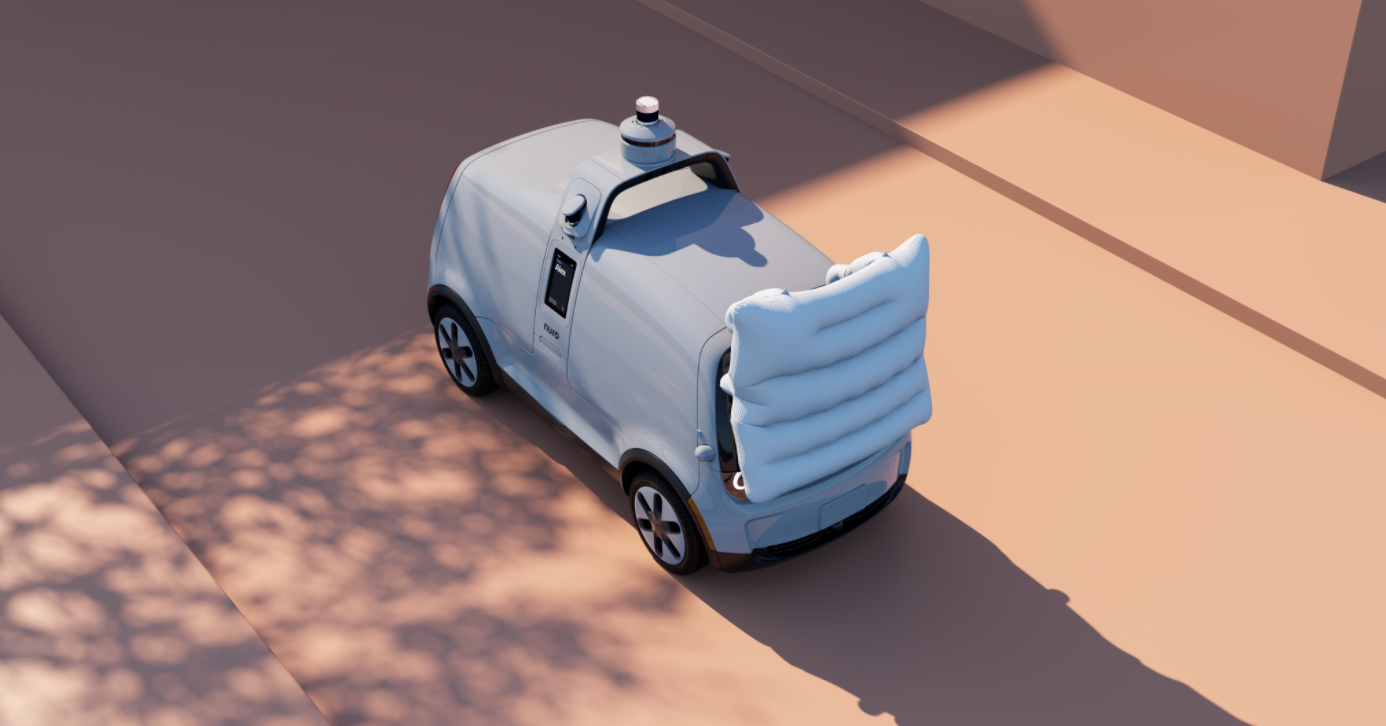 Its supplier partner BYD North America will assemble the hardware components of the new model; it will then be completed at Nuro’s new facility, where the bots will be readied for deployment. “BYD attaches great importance to this collaboration with Nuro,” Stella Li, executive vice president of BYD Co. Ltd. and president of BYD Motors Inc., said in a statement. Li added that BYD will use the manufacturing capacity of its Lancaster facility to support Nuro and bring more jobs to California. Nuro wouldn’t provide specific production capacity figures; the company says the facility has the capacity to manufacture and test “tens of thousands” of delivery vehicles per year. And it didn’t give a timeline except to say its Nevada facilities will be fully operational this year. Construction began at the site in November 2021. Nuro didn’t say where these commercial-grade bots will be deployed first. The company did confirm that it has reached a formal agreement with existing partner Kroger to use the new Nuro delivery bots.